“Nice is your superpower, not your weakness.”
Our January LadyDrinks Fireside Chat speaker Fran Hauser, author of “The Myth of the Nice Girl,”  This former AOL and Time Warner executive offers tools and language on how we as women don’t have to be passive, a pushover or weak in order to be strong in the workplace.
Dear ladies:
Who doesn’t love a good film on Christmas? My Christmas treat was an amble over to the Quad Cinema on 13th Street to see a little independent film called “The World Before Your Feet,” chronicling the travels of Matt Green, a man who made a pledge to walk every street of the Greater New York City area.
The film follows him on an 8,000 mile trek of beaches, cemeteries, parks, and neighborhoods where he finds rare treasures such as the first clinic to dispense birth control for women and “churchagogues”– synagogues- come- churches.  Green is meticulous about photos and documenting historical references on his blog.
No film about New York is ever complete without a reference about 9/11. It’s been 17 years since the catastrophe, and tears still sting my eyes when I saw his collage of makeshift memorials to loved ones.
The film also made me think back on the year for LadyDrinks. It’s a monumental moment for me in New York City as I have parted ways with my day job and pledged to run LadyDrinks full time. But, before that—
We kicked off 2018 with 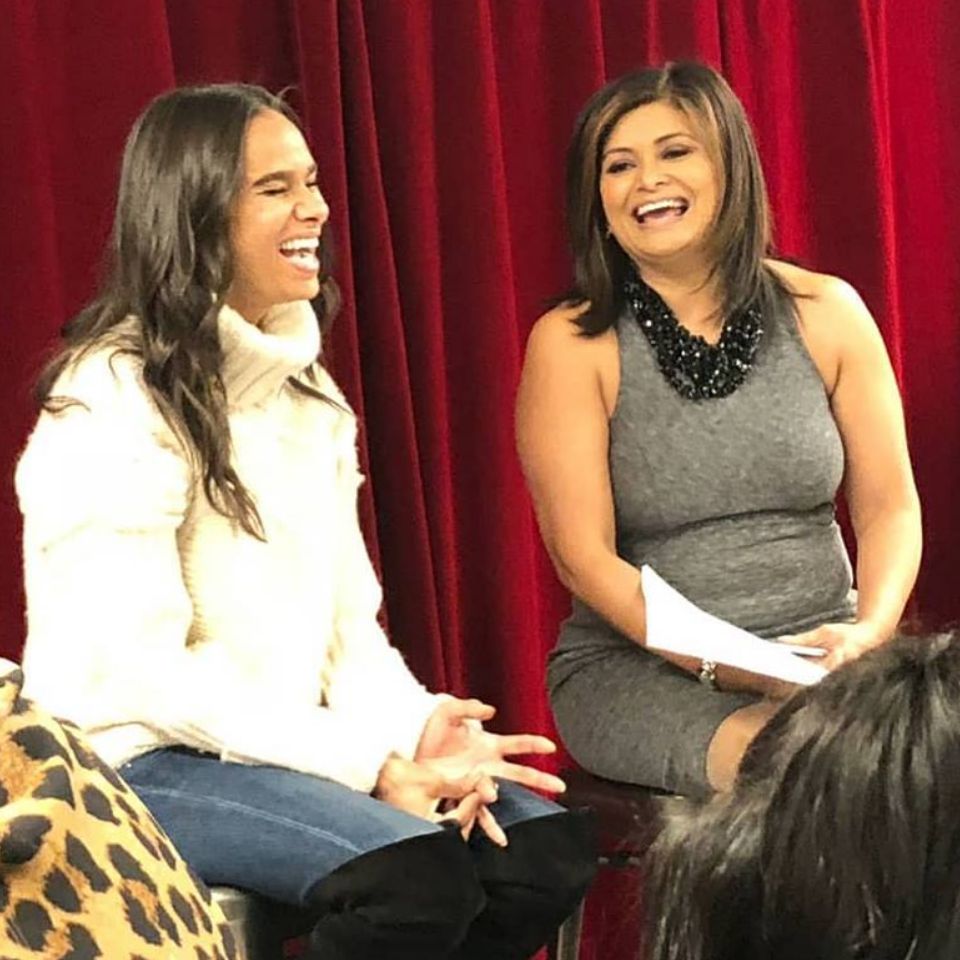 ballerina Misty Copeland talking about her journey to becoming the first African American female principal dancer for the American Ballet Theater.  Later in January, we hosted our annual private tour of the Metropolitan Museum of Art. Docent Margaret Samu led the popular tour of women-only artists, which sadly represents only 5% of the Museum’s artists. A reminder that we make our way to the source in April. A docent will lead ten women on a private tour of the Louvre of the female French trailblazers who were the first to get formal training and become bankable artists.
Our February winemakers dinner with Raj Patel of Patel Wineries sold out in a record 10 seconds.  We enjoyed a four-course dinner, paired with his wines, as he narrated the origins of the grapes and the curation process. Eighty women attended the Anjula Acharia fireside chat at Ripley Grier Studios. The response to this event was so great that we had to move rooms event day to accommodate the larger crowd. I recall the pindrop silence as Acharia spoke transparently about the year after one of her biggest failures in her career. She cried in a closet for a year. As a culture we don’t talk about the failures and I was so happy that she did.
I appreciated the same level of transparency at the Princeton Garden Party where Nandini Singh introduced her guest. Singh had rescued a South Asian female victim of domestic violence into her home and fundraised for her to gain shelter. Her ask to the room full of professional women was to help this lady find a job. It was a little piece of activism that day at LadyDrinks and I was so happy that we had paved the way for this kind of critical dialogue to occur. 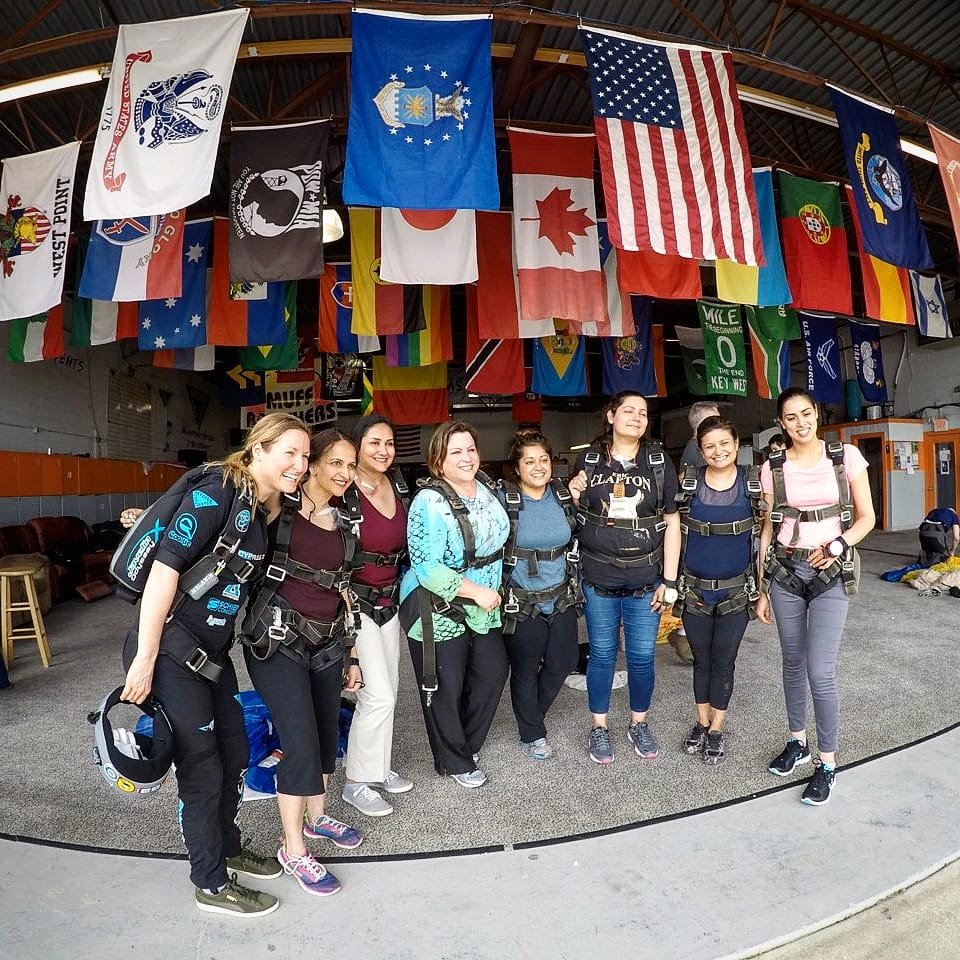 We hosted our first LadyDrinks event in London, where Aruna Seth, designer of shoes to the Royal wedding, was our featured speaker. And who could forget the LadyDrinks Skydiving retreat, where 7 women jumped out of a perfectly good plane? This exercise, while extreme, was intended to push ladies outside their comfort zones and discover what else is possible when we push ourselves to the edge.
2019 is shaping up to be amazing as well. We have a female leadership track of events just for members as well as our regular programming open to the public. Events listed here

NEW YEAR. NEW YOU.
We, as women, play so many roles in our lives: Mother, daughter, wife, employer, boss. It’s so important to put our own self-care at the forefront. It impacts that way we show up for all the other roles we play.
On January 31st, LadyDrinks hosts a fireside chat with two powerhouse South Asian women on the topic of putting wellness first: Rebecca Parekh, founder of The Well, and Sonia Patel, Chief Pharmacist and co-founder of the digital pharmacy Capsule.
Rebecca had a successful career in banking. While she loved her job, the demands and stress of it were real. One visit to a spa in Arizona helped hit the ‘reset’ button on her professional ambitions. She wanted to bring destination wellness to an urban market. This Spring, Rebecca flings open the doors on The Well, a new 13,000 sq foot membership-only, wellness facility opening in Union Square.
Sonia Patel was a former pharmacy manager for Sam’s Club. But she and co founder, Eric Kinariwala, a former Bain Capital analyst, were painfully aware that going to a pharmacy wasn’t always the most pleasant experience. And they wanted to reimagine this piece of everyday wellness.
The pair launched a start up called Capsule, staffed with full time pharmacists and couriers who will deliver your medicine to you anywhere in New York City.
Join us for an engaging chat with two powerful female role models at Luminary, the new collective for women, located on 29th and Broadway 6-8pm. BUY TIX HERE

Listen to the "Drink Like a Lady" podcast on these platforms: